92 years ago, my grandma was tossed out of a second-story window to escape San Felipe Segundo, the worst recorded hurricane to hit Puerto Rico until María hit decades later. Communities were torn apart as the only two documented Category 5 hurricanes ripped across the Island, one almost a century ago and the other 3 years ago.[1] My family, like countless others, lost everything in that 1928 storm and emigrated to the mainland. These pieces are in remembrance of those lived experiences.

As climate change worsens, storms like these will likely become more common and more severe in the region.[2] We are the eye of the storm, our human experiences translating each hurricane from hazard to disaster. Often the loss is not just of property and land, but of life. Mirroring a local memorial of María, sets of shoes follow the road to calmer places in recognition of the 4,645 lives lost. [3] Because these experiences are complex and entangled, each piece is overlaid on top of the other to build one final print that reflects this chaos and urgency. 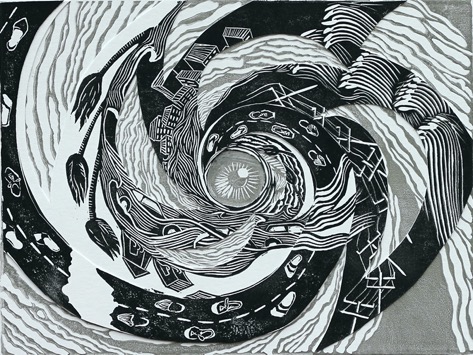 These images can be interpreted literally, as a hurricane and its numerous impacts, or they can be more symbolic: watching ourselves twist in a storm system of inequities that caused Puerto Rico to be without power for 328 days after María,[4] with impacts still being felt years later, largely due to a lack of US governmental support.[5] As the eye of the storm, we witness all.

[1] Fritz, A. (2017, September 19). Puerto Rico has a long history with tropical storms. None of them were like Hurricane Maria. The Washington Post. https://www.washingtonpost.com/news/capital-weather-gang/wp/2017/09/19/puerto-rico-has-a-long-history-with-tropical-storms-none-of-them-were-like-hurricane-maria/